MPG Animations
These 2 'panning' mini-movies were made using an unfinished version of POV Jam 1 to produce the two 180 degree hemisphere images needed for panorama.inc in these samples.
Cooldudeuc, CybrJACK, David DRP, JOPoolCO, MMandl, PCR DaveD, Wrgmr, all took part in it.
360 degree revolving panorama example(175K)
234 degree panning zoom/tilt example(147K)
Ripening Strawberry is an mpg animation made from the sbt.pov scene file. The quality is not great.(168K)

, originally done by Jeffry J. Brickley but modified by me to do 3D branching, media.
Crushed Velvet texture include 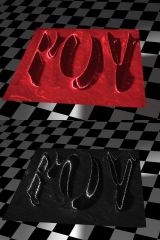 for v3.1 with Red, Green, Blue, and Black solid colors {currently version 98.47}
POV-Ray 3.1 'media' is used to make rngplnet.pov , a saturn-like planet.{currently version 98.6}
Motion blur can be done within POV, but the results I have gotten are not fantastic... yet. obj_blur.pov Slow and rough. JPG included to see immediately. {currently version 98.58}
Like strawberries? Well I have a raytraced one if you'd care to have it. sbt.pov As good as it may look, I advise against trying to eat it. {currently version 98.51}
Panorama.inc is for making animated pans of previously produced scenes. {version 98.50}
inxframe will allow for either multiple instances of current animation output, or previous animations, to be used as "input" [please note that this is not a complete working system as of yet {currently version 98.2 and not being updated}] 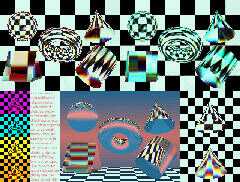 Spectrar is an include to create color dispersion in POV-Ray 3.0*, similar to Newtons prism; objects only though, not lights. Click on the image to get Spectrar.zip {version 97.9} See also Daren Scot Wilson's (originator of the effect) web site or MegaPov custom patch which has incorporated Daren's work for POV-Ray 3.1 and can do lights also.
Ever wanted to put hidden notices, information or ASCII drawings into an image file? DigiMarkeR may be the answer! A simple binary file appending batch. [Caution: Saving an image again will make the added text unreadable (also, use a copy of image to be safe); also, use copies, keep original images] {currently version 98.15}
Here's a semi-upgraded "Insert" menu for POV-Ray for Windows 3.*, Pov3tmpl.txt , which you place into the 'bin' folder. Be sure to rename your original to something like  pov3tmpl.txb  first {currently version 97.849}
Image color test scene britetst.zip for POV-Ray.


The POV-Ray Web Ring
Ring around the POV-Ray.